The Jaisalmer Fort, popularly known as Sonar Qila, is the most notable monument in the city (Golden Fort). A quarter of the residents of the ancient city still live inside the fort, making it one of the very few “living forts” in the world. The Indian border in western Rajasthan is also guarded by the city of Jaisalmer. The Thar Desert and the Pakistani border are both not far from this “Golden City.”  Jaisalmer Fort is not merely a tourist destination, in contrast to the majority of other forts in India. In addition to historic havelis (homes), it also has stores and hotels. The Jaisalmer Fort and five other forts in Rajasthan were included in the list of UNESCO World Heritage Sites under the category of Hill Forts of Rajasthan in 2013, during the 37th session of the World Heritage Committee held in Phnom Penh, Cambodia.

Culture and Art of Jaisalmer

The majority of Jaisalmer’s native population practices Hindu ceremonies and customs. The local Marwari community celebrates the Hindu holidays with a strong sense of devotion. The indigenous Jaisalmer residents’ social and cultural life is deeply rooted in the traditional folk music and dance. In Jaisalmer, women typically perform the Ghoomar dance on significant festivals. The Jaisalmer culture is also represented by the kathaputli and kalbelia dances. Jaisalmer is known for its superb traditional silver jewelry, fine needlework, stone carvings, ornately embellished leather goods, and printing. The Jaisalmer goldsmiths specialize in creating exquisite silver jewelry. The traditional food of Jaisalmer, including Dal Bhati Choorma, Gatte ki Sabji, and Ker Sangri, should never be missed.

The history of Jaisalmer begins in the 12th century. According to documented history, Rawal Jaisal, the oldest heir to the Rawal of Deoraj, was not crowned king of Lodurva, but a younger half-brother. When searching for a new place to establish his capital, Rawal Jaisal stumbled upon the wise man Eesul. The sage informed him about Krishna’s prophesy, according to which a member of his Yaduvanshi tribe will establish a new empire at this location. In 1156 AD, Rawal Jaisal built a mud fort, gave it his own name of Jaisalmer, and proclaimed it to be his capital. Shalivahan II, Rawal Jaisal’s son, is the ancestor of the Manj and Bhati Rajput families. On Trikuta Hill, the fort of Jaisalmer rises among the vast, sandy Thar Desert and has seen countless conflicts.

The fort blends into the golden desert thanks to its huge yellow sandstone walls, which are a tawny lion hue during the day and fade to honey-gold when the sun sets. It also goes by the names Sonar Quila and Golden Fort for this reason. The Jaisalmer fort is situated on a hill that rises 250 feet (76 metres) above the surrounding farmland and is 1,500 feet (460 metres) long and 750 feet (230 metres) broad. A double line of defence is formed by a wall that rises 15 feet (4.6 meter) high in the fort’s basement. Fort’s bastions are connected by a 30-feet chain (9.1 metres). Four exits lead out of the fort, one of which used to be manned by cannons. On the top of the fort’s walls, there is a unique contraption that was used to predict the weather. The exquisite fusion of Rajput and Islamic architectural styles, which appears gorgeous at night, will undoubtedly attract people’s attention.

The city, which spans around 38,401 square kilometres and shares an eastern boundary with Jodhpur District, is situated at Latitude 26.9 and Longitude 70.9. Bikaner and Barmer districts surround Jaisalmer, while Pakistan is located on its northern and northern-western borders. The area surrounding Jaisalmer, which is arid, sandy, and very hot, is mostly rocky and stony, with a radius of about 60 kilometres. 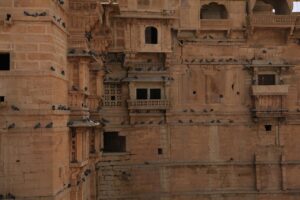 Typically lasts from March to August and is very hot. The temperature fluctuates between 22 and 42 degrees Celsius.

From July to September, Jaisalmer receives over 70% of its yearly precipitation, with July seeing the highest. Due to the city’s location in the Thar Desert, monsoon activity is essentially non-existent, and Jaisalmer has dry weather for the majority of the year. Every year, rainfall in the west brings around 15 centimetres of rain.

This period often starts in the middle of November and lasts through the end of February. Jaisalmer experiences substantially colder winters, with average temperatures of 36 to 8 degrees Celsius.

Attractions Inside the Fort

Jain Temple: The most stunning religious buildings in India are generally considered to be the Jain temples. There are a total of seven Jain temples inside the Jaisalmer fort, all of which were built between 1300 and 1700 AD. The Parsvanatha Temple is the most spectacular Jain temple in the citadel complex.

The Tazia Tower: The magnificent Tazia Tower is situated just across from the Maharaja’s Palace. Muslim craftsmen of exceptional aptitude built this five-story pinnacle in a style that became well-known throughout Bengal.

Chauhata Square: The most well-known magnificent buildings, like the Maharawals, are situated in front of Chauhata Square. Maharawal’s marble throne, which is situated above a set of marble stairs, is the main draw of this location.

The Entrance Gates and Pol: Tourists are drawn to this location by its gorgeous architecture and elaborate design, which captures their interest while they are there. The fort’s entry gates, Ganesh Pol, Rang Pol, Bhoota Pol, and Hava Pol, are renowned for their exquisite sculpting and magnificent design.

Alleyways: The Jaisalmer fort’s lanes are simply enchanted, lovely pathways that have seen many battles, celebrations, and moments of joy. Although you can find your way through these lovely streets, getting lost would be ideal. Huge forts, stores on the lower levels, and guesthouses on the top levels encircle these passageways.

By Air: Because there isn’t an airport in the city of Jaisalmer, the closest airport is Jodhpur, which is around 275 kilometres away and serves both domestic and international flights to and from major cities.

By Rail: You may also opt to travel to Jaisalmer by train because it has strong train connections to important cities like Delhi, Jaipur, Mumbai, etc.

By Road: Jaisalmer is well connected to the major towns by roads as well, so you may select any public or private mode of transportation to go to the Jaisalmer fort, such as buses or vehicles.

How much does Jaisalmer tour cost?

Thank You for Visiting Our Website “Fact Houses” (facthouses.com)